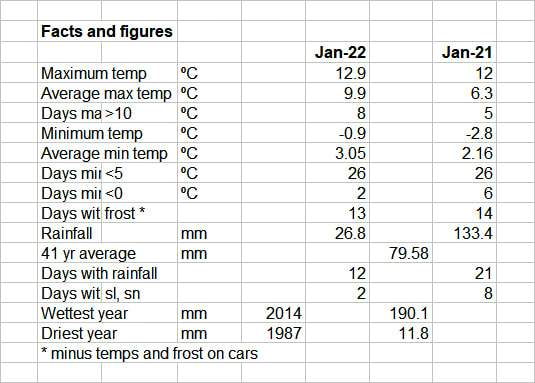 January was a relatively dry month, mild during the day, a number of frosts/car frost overnight, just 2 days with snow flurries and an equal mix of bright and cloudy days.

The trend for January is marginally increasing but this is against a background of very variable amounts year on year. Last January was colder on average overnight but not especially so; frosts were similar.

​A somewhat unremarkable month for one that I suspect we all assume will be really wintery even though the data doesn’t support that stance. The Met Office have said that this mild weather is going to bring the flowers out some 2 weeks earlier; looking at snowdrops and crocus plants they could well be right! 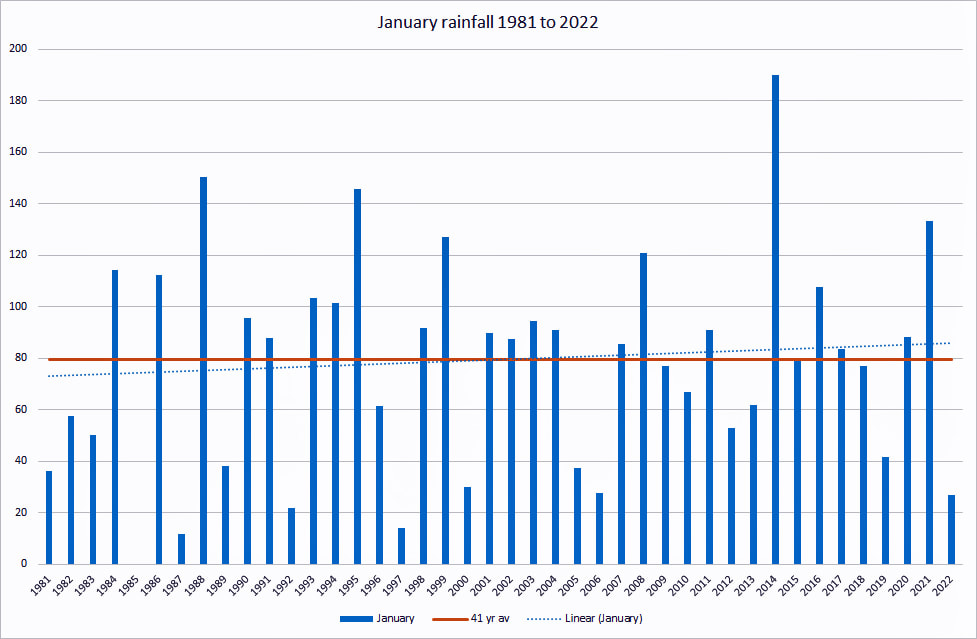 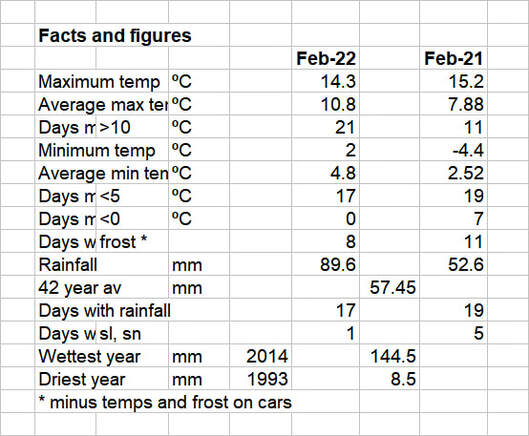 ​A month that we will all remember for the two named storms, Eunice and Franklin, that came quickly one after the other on 18th and 20th.

I hesitate to say that they were not as bad as predicted as that is a view expressed by someone with very little damage and probably not shared by people who were a lot worse off.

Certainly there were a number of trees down together with cables and, as might have been expected, the railway suffered. Top marks to the people who cleared the obstructions so quickly.

After a dry January, February started to make up with nearly 90 mm of rainfall spread over 17 days, the wettest giving 20.6 mm.

February has seen wide variations in rainfall from as little as 8 mm back in 1993 to a huge 144 mm in 2014. 18 of the past 42 years have been above average and you will see from the linear trend line on the graph that February is getting a good deal wetter.

The temperatures were quite mild with a maximum of 14.3° and a minimum of 2.0°. There was frost on cars over 8 mornings. Compared with last year, this February was not that different on average but 2021 saw 7 consecutive days with minimum temperatures below zero and a low of -4.4°. 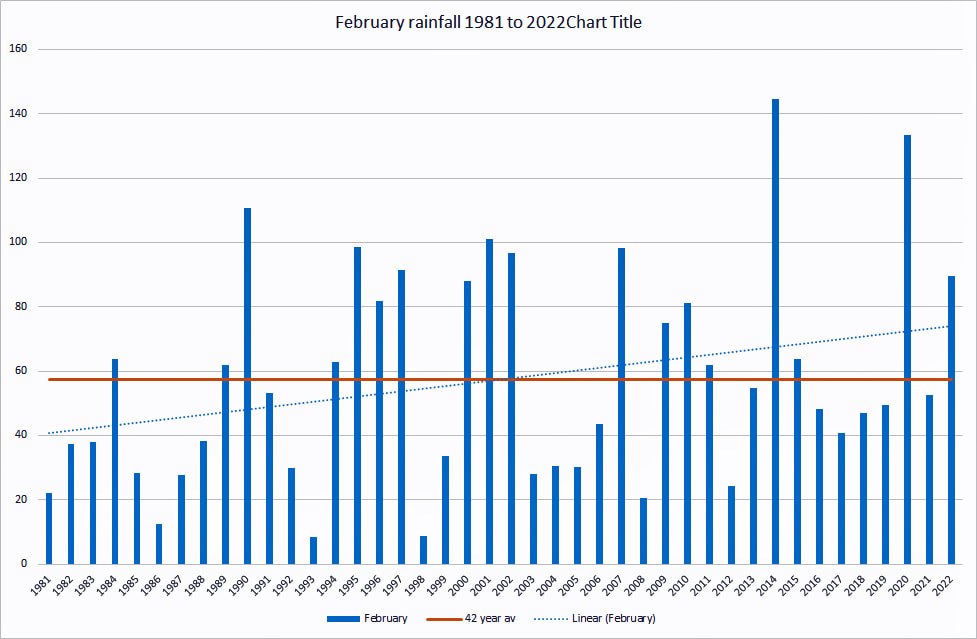 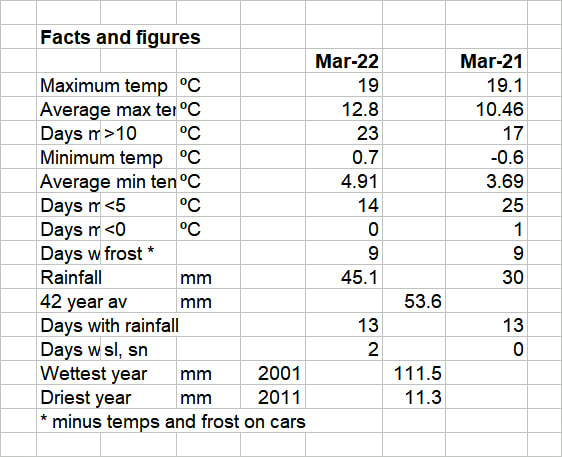 What will we remember about March; the very mild days or the snow showers at the end? As time goes on we probably won’t remember it at all!

March was a mild month but with a sting in the tail. Temperatures over the middle period were warm but dropped dramatically for the last 3 days. However overnight temperatures were often down in the low single figures with frost evident on 9 mornings.

It was a dry month with rainfall below average although March is not a wet month with average rainfall of 53.6mm and a trend decreasing.

This year March compares not that differently from 2021 with same maximum and similar minimum temperatures.

The average figures however suggest that this March was warmer overall perhaps reflected in the way in which the grass is growing and the flowers and blossom has been magnificent.


​Over the winter months (October to March) rainfall—which is when the aquifers are replenished—was below average and well below some the wettest times we have had over the past 41 years. Please see the chart that is with this report. 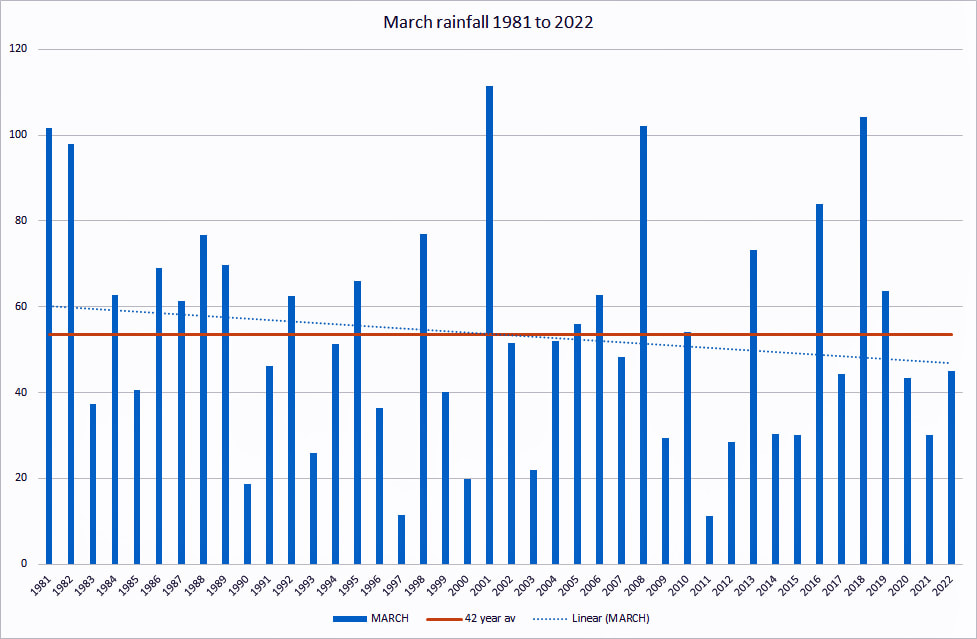 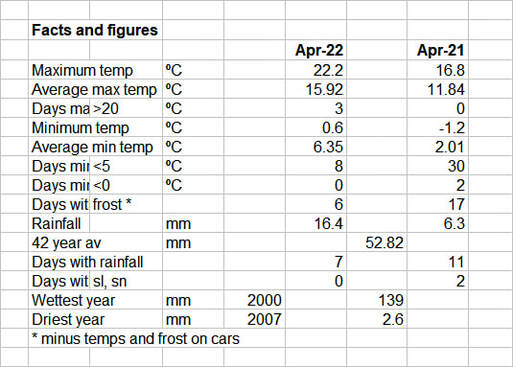 Compared with last year this August was on average the same maximum temperature wise but had warmer nights. Rainfall was virtually double compared with last year but the same level of wet days.
​Apparently the wheat harvest has been poor due to a combination of the wrong weather at crucial times and then too much wet when harvesting was taking place.

​My runner beans have certainly suffered from not enough water when it was needed to give a good crop but apples are some 2 weeks ahead of the norm because the weather was right for them.
​​ 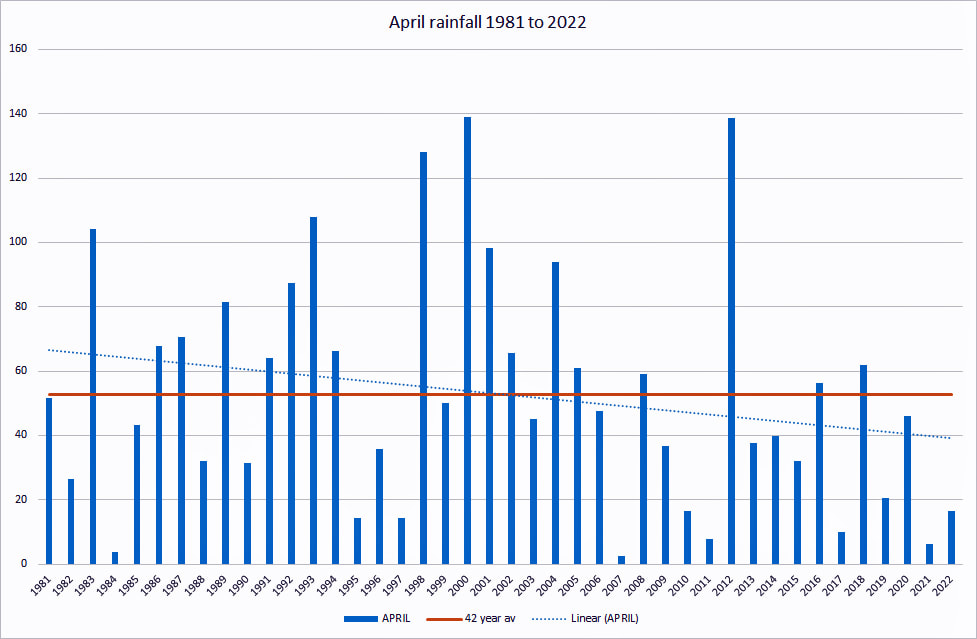 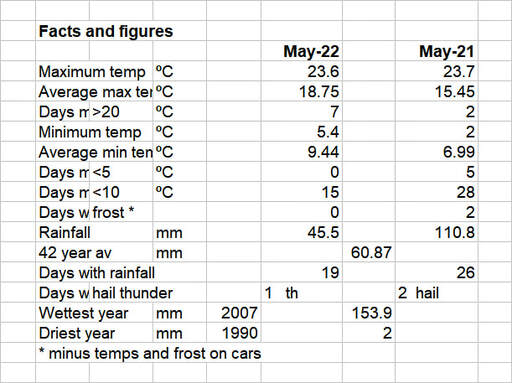 May made the grass grow or, more accurately, the rain did.

It was not a particularly wet month with rainfall well below the 42 year average but with 19 days with some precipitation it was enough to keep the surface wet enough for the grass and cereal crops to grow well.

​Most importantly it was fine for the fête and everyone was able to enjoy the day after such a long break. 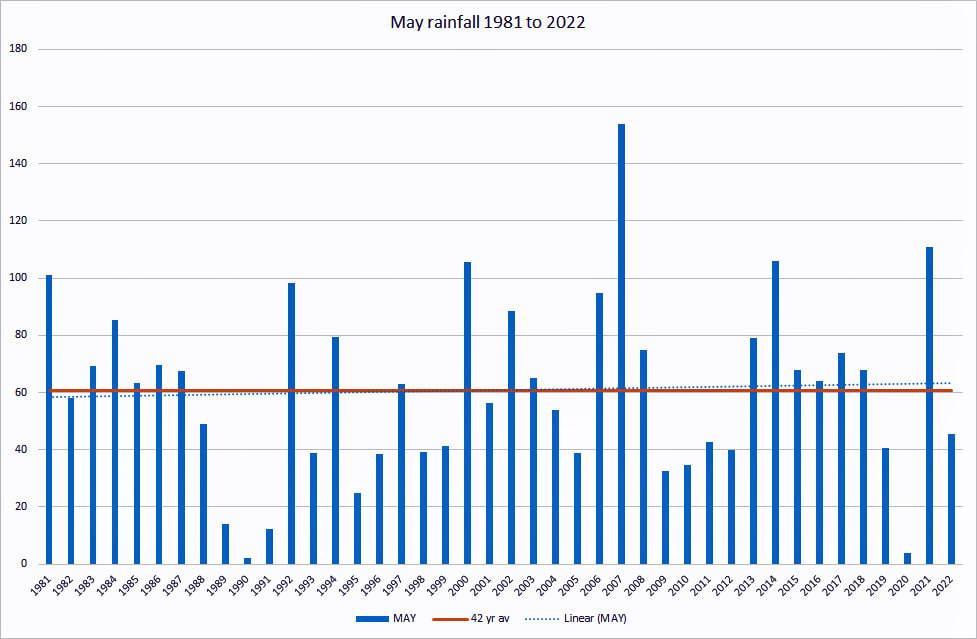 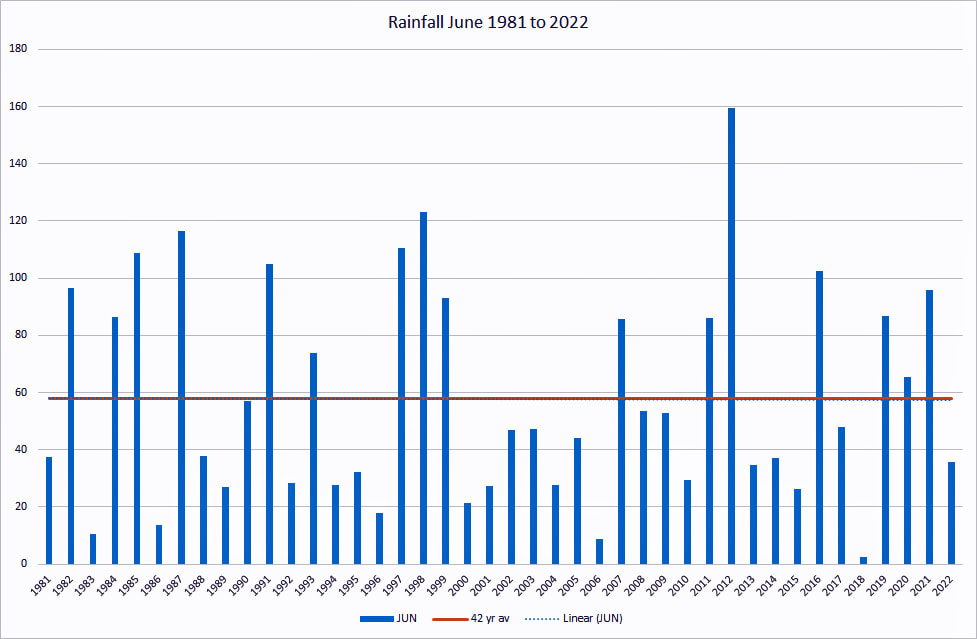 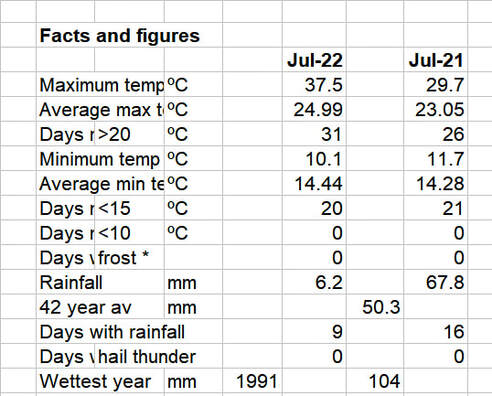 July was a month to remember! The hottest day and the driest month all in one go is something to go down in the record book.

The maximum temperature I recorded was 37.5°; yes it was a LOT hotter than that in the sun but temperatures are recorded in the shade and, ideally in a Stevenson Screen (which I don’t have).

It is also worth remembering that places like airports and the centre of cities/towns act like storage radiators and heat the air even more so temperatures there are always going to be hotter than Hyde Heath.

You only need look at the grass to see how little rain we have had.

Average rainfall in July over the last 42 years has been 50.3mm; just 6.2mm this year. However the trend over that time is increasing.

The first 7 months of this year have also been very dry with approx. 275mm compared with a 42 year average of 410mm.
​
Comparisons with July 2021 are not really meaningful; this year was warmer, drier and different!
​ 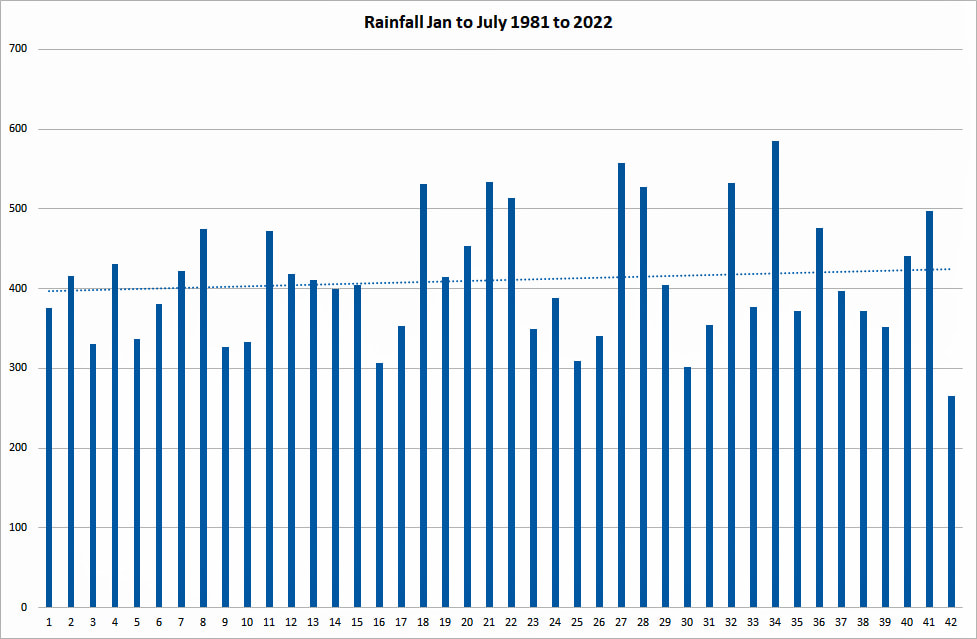 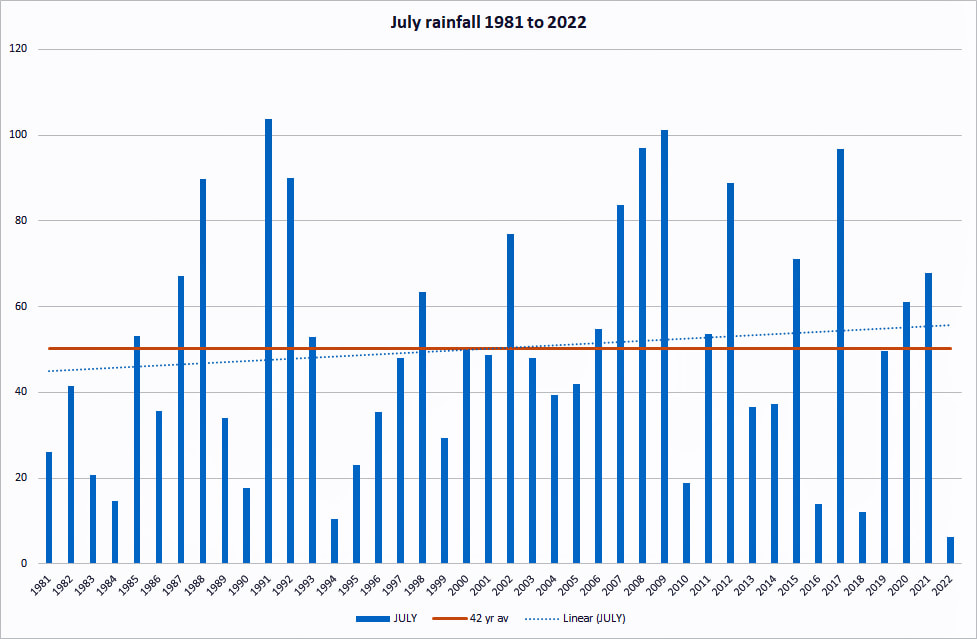 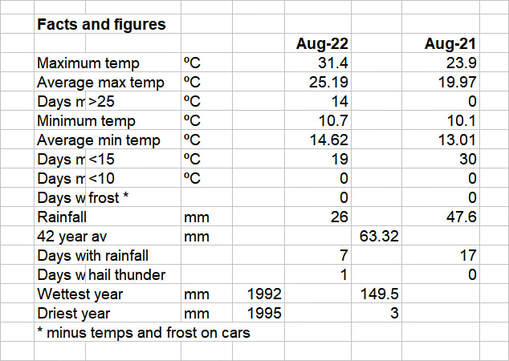 August was dry and hot! Not as hot or dry as July but nevertheless continued the pattern we had seen.

There was a small amount of rain on a further 5 days but it evaporated as soon as it hit the surface!

There were a lot of sunny days; 15 days when I noted either “sunny” or “mostly sunny”.

Temperatures were always above 20° in the day with 5 days above 30°, and overnight the minimum never dropped below 10°.

Despite the 6th month in a row with rainfall below—well below—the 42 year average, we have so far escaped a hosepipe ban.

The Affinity Water website shows that the groundwater aquifers are below where they should be but not dramatically so currently; and HS2 are still washing down their road at the Barley Mow!
​
August 2021 was rather different. More rain but still below average, and much lower temperatures. Surprisingly the linear trend on rainfall is showing a small increase over the 42 year period.
​ 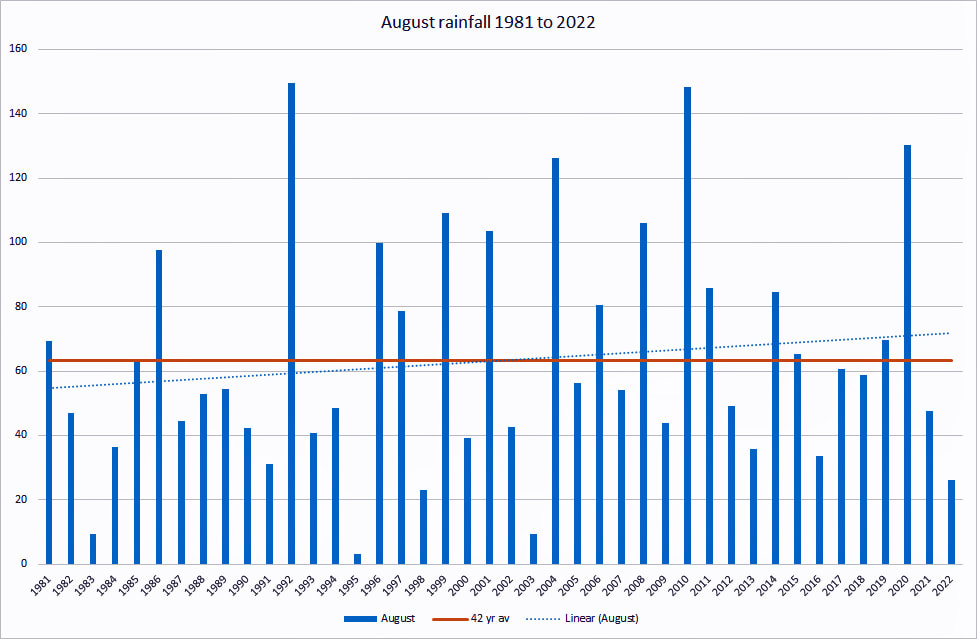 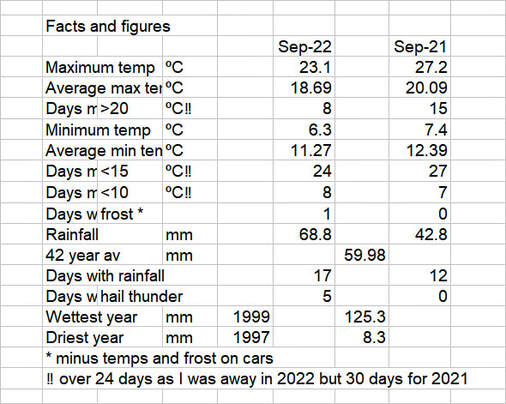 September was a somewhat mixed month with a wet first 2 weeks and a last day with 12mm of rain, and fairly pleasant weather in between.

At last I can report that the rainfall was above the 42 year average but maybe of significance is that the linear trend over those years is down from 70mm to 55mm on average.

This September was wetter and cooler than 2021.

There was a marked contrast between the start and end of the month; the first two weeks saw maximum temperatures 20+/- 3° and minimum 13+/- 2°, whereas the last 10 days dropped to approx. 15 and 8° respectively.

Dramatically we saw the grass that had been dead and brown burst into green and growing!


As I write this somewhat later than I meant on 10th October, I would have expected the trees to have lost far more of their leaves given the dry summer—yet to happen. 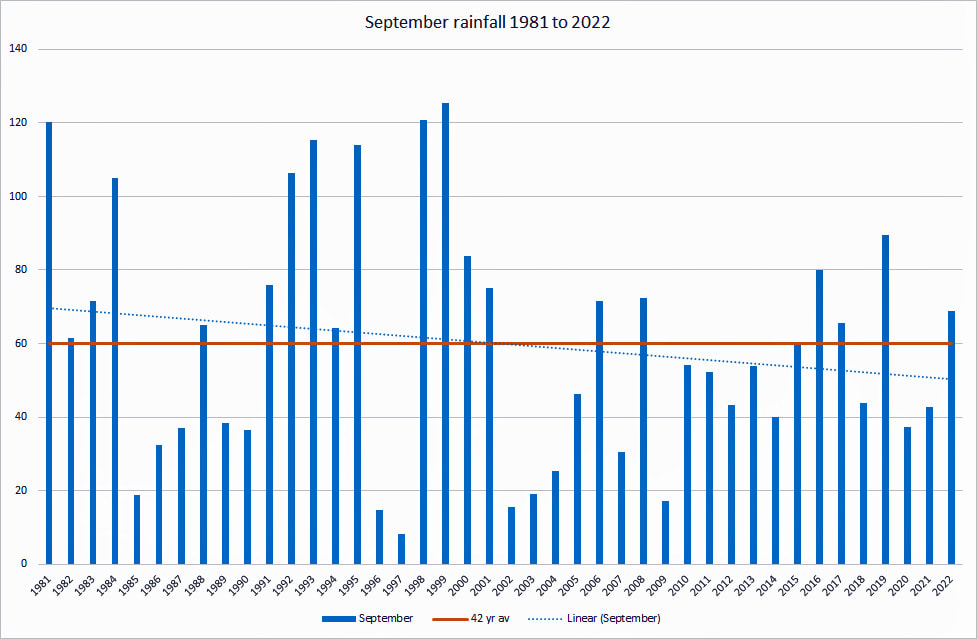 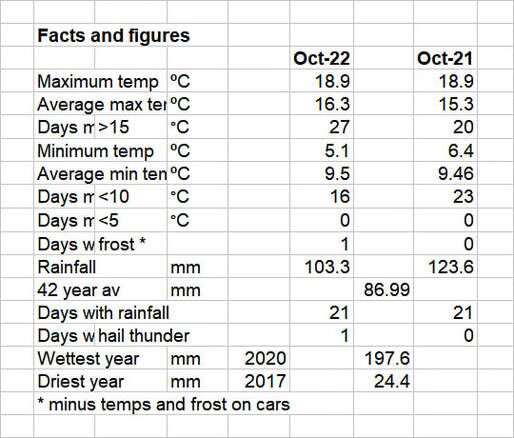 October was a mild and wet month. Very similar in fact to October 2021 with temperatures almost the same and just marginally less rain this year.

Rainfall was above average and the 42 year trend is showing a slight increase.

Over the 42 years the rainfall has been very variable with a range from 24 to 198mm. Clearly we can’t rely on October for anything.

The Met Office were reporting higher than usual temperatures but nothing approaching the 29° back in 2011 on October 1st in Kent.

The Hyde Heath maximum that October was 24.3°---WOW. I thought that the leaves were staying on the trees for a long time; then a great mass fell when the rain set in during the 3rd week.

The grass has recovered and the flowers (my dahlias in particular) have continued to bloom throughout the month.


The month could be split into 2 parts; the first 15 days were warm and mostly dry whereas the last 16 days were much wetter although still warm. In fact the last 2 weeks saw some rain at least every day---and it has continued into the first few days of November.​ 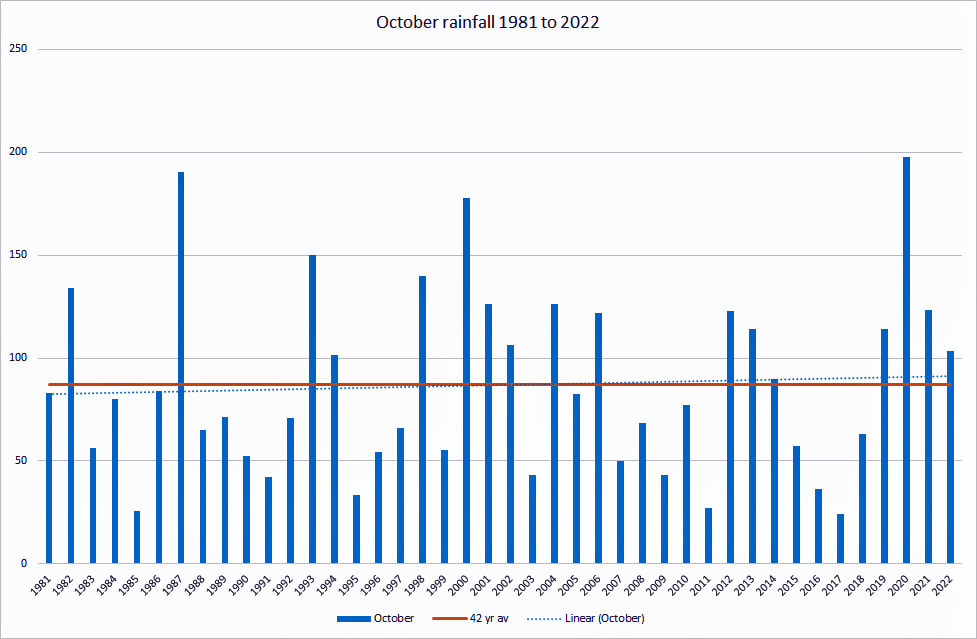